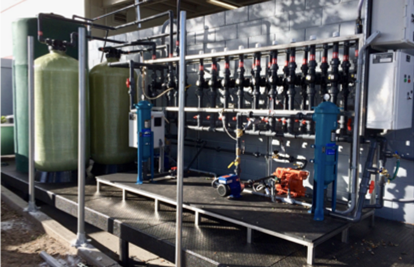 Problem: A technical university had a marine engine testing facility with multiple test tanks in interior and exterior rooms. The discharge from the engines was causing the water to get dirty so that the university was spending between $15-20,000 per quarter hauling water!

The interior rooms had sets of test tanks that could be manifolded together to be treated as one. The outside rooms did not lend themselves easily to manifolding the tanks together. They called us to develop a solution that would allow them to either treat and discharge the water to the sewer or recycle the water with no discharge.

Solution: After analyzing available options, we engineered and installed a single water recycling system adjacent to the building that was capable of receiving the water from all of the tanks at different times, removing the oils from the water, disinfecting the water, and returning the water to the respective tank system.

The tank manifold systems in the interior rooms are individually piped to the recycling system with a supply and return line. These attach to a dedicated automated valve system that is programmed to periodically select a specific tank system, draw out the water through the system and return it after treatment to that tank system. The PLC insures this sequence occur on a pre-determined schedule.

Piping drops were installed in the outside rooms so that a technician can manually place an oil skimmer assembly with an integrated suction/discharge hose assembly into any tank and send that water through the recycling system. A remote control panel allows the technician to start/stop the recycling system and to select a time period for the recycling to occur. Processed water passing through the recycle system is free of particles greater than 10 microns in size, substantially all emulsified oils, waxes and other volatile organic compounds.

The engineers at the university tell us that they are saving money and the system constantly “exceeds expectations”!

Problem: An international engineering design firm working with a Port Authority contacted us to help them design an equipment and truck wash. The Port had an old wash pad that was too small and old wash equipment that no longer worked very well. The Port needed a larger pad and updated washing and water treatment equipment to accommodate the washing of their existing fleet.

They had the option of either building the wash system with either a closed loop wash water treatment system or a sewer discharge treatment system since they had sewer access but it was quite a distance to the sewer connection.

Solution: Wash Bay Solutions helped the engineering firm develop the design for the wash pad, solids settling system, the wash system and two options for water treatment. For both options, we designed the wash and treatment systems to be installed in a portable transportable equipment room to make it simple and cost effective to install. Requests for Quotations were put out for both options and the electric hot water pressure washing system with the SPT-10 Clarifier oil water separator for sewer discharge turned out to be the most cost effective for this particular location with in the port.

We coordinated with the construction company while they were building the wash pad, settling system and sewer connection line. When they were ready, we shipped up the 20’ transportable equipment room (TER-20) and helped them install it in place and get it up and running within a couple days time!

Problem: An equipment rental company specializing in heavy-duty construction equipment needed to build a wash bay for their haul trucks, dozers and construction vehicles. They had limited inside space in a leased building so they needed a to put all of the equipment inside a portable equipment room that they could pick up and move if needed. Due to their location in a remote area with no sewer connection, they needed a closed loop wash water treatment system.

The company called and asked us to build a heavy-duty, self-contained washing system and help them design the wash pad and solids settling area.

Solution: We had worked with this client for years so we were well aware of the washing and solids handling complications associated with heavy construction equipment. With input from the client, our engineers designed a wash pad design and solids settling system that fit into a rather tight footprint.

All of the wash equipment including a closed loop wash water reclaim system, an electric pressure washing system, and a demucking system was installed in a 40’ Transportable Equipment Room (TER-40) and located adjacent to the wash pad. This saved building costs, preserved valuable warehouse space and will allow them to move the entire system to a different facility if needed. 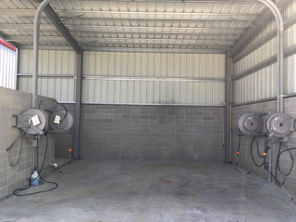 Problem: A mining company was washing and de-icing their large mining equipment with a 150-200 gpm water cannon monitor system. In the summer, washes typically averaged 1-2 hours, using 9,000 to 24,000 gallons per vehicle.

In the winter months, however, the company used the same water cannon monitor system to defrost the equipment and then wash it. Defrosting in the depths of winter could often take up to 10 hours which added an additional 90,000 to 120,000 gallons per vehicle!

The company called Wash Bay Solutions and asked us to develop a heavy-duty washing solution that would greatly reduce their water usage.

Solution: With input from the client, our engineers enhanced our existing demucking system with a new nozzle design to produce our 60 GPM @ 1000 PSI Mighty Monitor system.

The key to this system is our specially designed, multi-directional, 60 gpm @ 1000 psi nozzle. These nozzles are trolley-mounted so they can ride along I-beam systems, immediately adjacent to the vehicle. Specialized hose trolley systems attached to the nozzles allow the operator to wash the 60-ton mining vehicles almost single-handedly!


Results: The client is very happy the ease-of-handling, range of movement, and washing power of the new design. They are able to wash their large trucks quickly and effectively, using less time and about 1/10 of the amount of water than they did with the water cannons.
CONTINUE READING

“Our washing operation used to dump 3,000 to 5,000 gallons of process water down the sewer each day because it was contaminated with petroleum oil and wax. Not only did we lose this water in the middle of the worst drought in history but the heat energy it contained as well. We also risked plugging up the city sewer system.

With the help of Wash Bay Solutions, we designed a system using a floating oil skimmer on a hose, a non-emulsifying air pump, and a coalescing stainless steel oil water separator.

The system removes the floating oils from the top of the water surface and directs the water continuously into the oil water separator. The unit produces water so clean that we can use it in our boilers and cooling towers. Zero water is now sent down the sewer.” 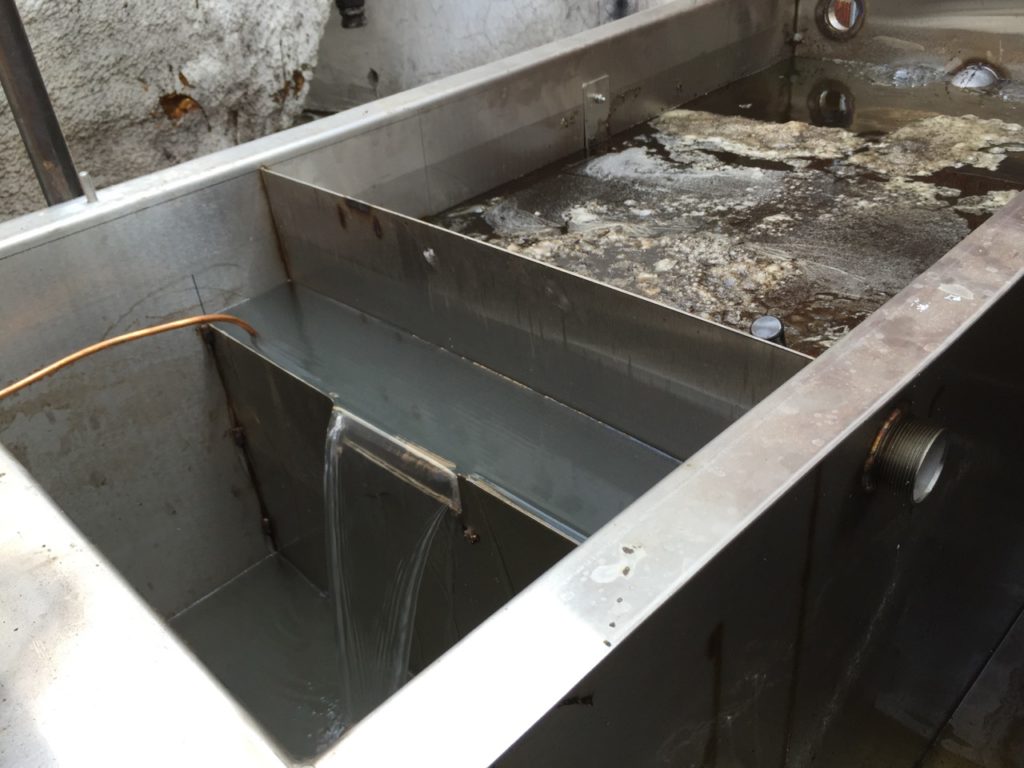 Problem: A gold mine in central Mexico was modifying their vehicle maintenance facility and adding a wash bay for their heavy mining trucks and vehicles covered with solids, dirt, oil, and grease. The mining company contacted an engineering firm in Arizona who then contacted us for our wash bay expertise.

Solution: We worked with the engineering firm to help design the wash bay with the proper pad layout to accommodate the enormous vehicles, substantial wash water volumes and large amounts of solids. We also had to account for rainwater volumes since their wash bay was uncovered.

Our SPT-50 Clarifier Oil Water Separator System was a perfect fit since it was designed for treating wash water from industrial washing operations with large solids concentrations. It includes a stainless steel clarifier oil water separator that has both a clarifier section, which will remove all settable solids and an oil water separator section, which will remove all non-emulsified oil from the waste stream.

During construction of the wash pad and installation of the SPT-50, we continued to work with the engineering company so insure all tasks were completed properly. We provided all manuals and documentation in both Spanish and English so that as little information as possible was lost in translation. The client has reported that the SPT-50 has been working very well since installation.

Because of the size of the vehicles, which can measure over 40 feet long and 12 feet high, the average wash time was lasting one to two hours in normal weather conditions, and 10-12 hours in winter conditions. That is a water volume of between 9,000 and 140,000 gallons per vehicle!

The company called Wash Bay Solutions seeking a solution that would save them both labor and water while at the same time providing a quality wash.

Solution: For testing purposes, we rented them our revolutionary DM 1000 demucker, which provides 20 GPM @ 1000 PSI of cold, fresh or recycled wash water.

The testing only lasted a short time. Within days, they determined that it worked perfectly for them – cleaning their large trucks quickly and effectively, and using about 1/10 of the amount of water used in their traditional water cannons.

Results: The client remains very happy with the demucker efficiency and ease of use, and the fact that it saves them time and water in an environmentally effective way.

This modification consisted of removing an old concrete floor and replacing it with a new wash bay and installing a closed loop wash water reclaim system and a new electric pressure washing system.

Originally, the first stage of the locomotive wash system consisted of three different wash arches.  Circa 1970, this wash system included a wetting system to wet the locomotive, a second arch to apply soap and finally, an acid wash to serve as a surface brightener.  The second original stage was a rinse arch system that included a 10,000 gallon storage tank, a 100 HP rinse pump, a rinse arch with galvanized nozzles and a 1970‘s vintage process controller.

Problem: The whole system was out-dated, expensive to run and maintain, and no longer performing efficiently.  Many of the parts were hard to locate and expensive, while environmental issues long ago decommissioned the acid arch.  The wetting portions of the wash performed very poorly.  And the dated pumps were simply worn out.  Finally, 1960’s vintage control panels were outdated and hard to maintain.

Due to budge and time constrains, this entire project, from initial engineering investigation to design to construction to start-up, was completed in just 90 days.

During that time, the maintenance personnel were able to continue working. The client reports that the locomotives washing is much more thorough and efficient.

In addition, the systems needed to collect and isolate heavy solids loads, provide strong disinfection for odor and bacteria/BOD control, and filter the water adequately for reuse.

SOLUTION: Washbaysolutions provided 600-gpm engineered systems for each location to collect, treat, disinfect, and store clean recycled water for reuse. Large conical-bottom tanks assisted with the extensive solids removal required, along with screen and basket systems and in-line filters. A large ozone disinfection system was utilized to control the odors and organic contamination.

RESULTS:The initial two locations have operated successfully since 2003 without any major problems. As the facility maintenance personnel became familiar with the operation of the system and its capabilities to handle the large solids loads, the quality of the recycled water soared above their initial expectations.