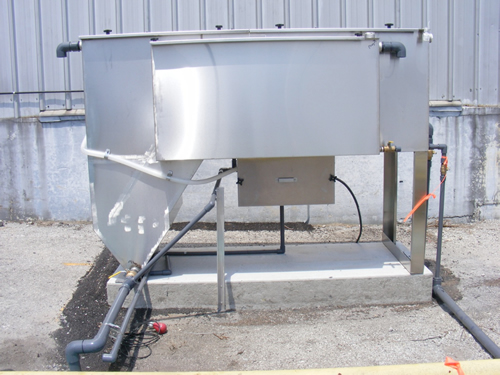 WashBaySolutions.com offers a full line of oil and water separators that conform to the guidelines of API 421 for the removal of all free and dispersed non-emulsified oil and solids that settle from the waste stream. Get a Quote Today!

Please see a list of question and answers below related to our oil water separator products.

In short, a clarifier oil water separator is designed to remove both heavy suspended solids AND free and dispersed, non-emulsified oil from the oil water mixture.

Oil Water Separators are designed to effectively remove floating solids and non-emulsified oil from an oil and water mixture on a beginning to end flow process through the separator. The mixture of oil and water enters one end of the separator and slowly flows toward the other end. If oil and water are mixed and not emulsified, the oil originally exits the water in different sizes of droplets. When the drops of oil are large enough and the flow is laminar, or moving in a smooth and gentle flow with no turbulence, the oil droplets will separate before reaching the end of the separator tank.

Since the calculations of Stokes’ Law are supported on a zero velocity flow, a Reynolds number lower than 500 guarantees optimal separation. The majority of oil water separators commonly use the parallel corrugated plate design which causes oil droplets to enlarge in size and ascend to the surface of the water. Flow of oil and water through the oil water separator follows several main steps after entering the separator:

It is especially essential for the flow of the liquid through the oil water separator to be laminar to act in accordance with Stokes Law. To achieve this type of flow, a design that is cross-fluted and having an internal structure of connecting channels between adjoining plates can be used. With this design and the enlarged surface area, the effectiveness of the oil water separation process is greatly enhanced.