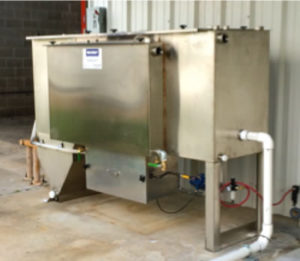 Problem: An engineer consulting with a railroad called with an application at a locomotive repair facility. Over time, lube oil and diesel fuel leaked from the locomotives into an inspection pit. Periodically, the oil along with sand and dirt collected in the pit was discharged into a retention pond. The oil was then skimmed from the surface of the pond and the water discharged to the sewer.

The roe skimmer wasn’t quite doing a good job so he asked us for suggestions on how to better treat the water before discharging to the sewer.

The SPT-20 did an excellent job of cleaning up the water during the week. The only issue reported was that their sump overflowed with water every weekend so their staff was met with too much water on the pad every Monday morning.

Our maintenance manager trouble-shot the entire system with their staff through Facetime, phone calls, and emails. A local electrician also tried to find the source of the problem since there were other issues at the facility. They tried multiple modifications but the problem persisted.

Finally, we engineered and assembled a hybrid control system just for their particular location and sent it out to them. The control system worked and the system is now fully operational and the client is very pleased.